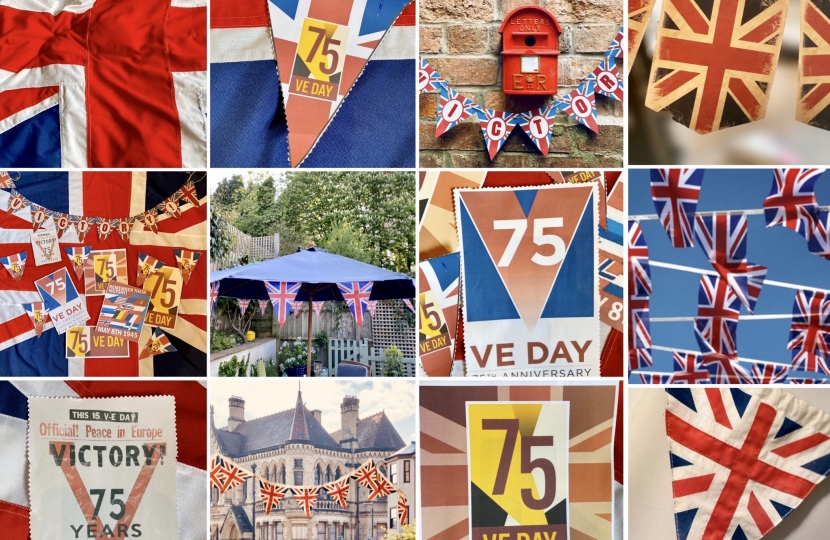 Victory Europe (VE) Day celebrations on 8th Maywere set to be a wonderful spectacle of red, white and blue and patriotic celebrations across Stroud, the Valleys and Vale.  The government arranged for Friday to be the first May bank holiday and the council were relaxing rules to maximise fun.  I was looking forward to the Victory Park commemorations and felt honoured to be asked to speak at the event.

We can only celebrate the 75 years since VE day in our homes now, but many are still panning to get the bunting out for this incredible anniversary.

VE Day in 1945 brought an end to the armed conflict in the European theatre of war.  While WWII still raged in the far east, members of all three armed forces from Stroud could begin to look forward to returning home.

VE day itself was an opportunity for the Home Front organisations and local residents to let their hair down after years of hardship and horror.  Gloucestershire had sadly seen Bristol burning in the night after sustained enemy attacks, knowing that there was little our caring communities could do to help people in the city.  Every family was touched by loss in some way.

A Cranham resident’s account of the night that a ‘lone enemy aircraft, maybe lost, came up the valley from Stroud disposing of its bomb load’ is gripping and terrifying at the same time.  She said the first bomb landed on Painswick without a sound.  The second bomb ‘came screaming, roaring out of the dark, past our cottages and exploded at the bottom of the hill. The sound was paralysing…’  The blast was drastic, throwing her young 13 year old self across the room.

Local life during the war was not ‘normal’ either with rationing, toys being a rarity, gates and railings being removed for their metal and all available land being used for food production amongst many other challenges.  I cannot imagine watching Selsley Common being ploughed but I understand it was.  Yet, even with all that people had seen and experienced, the photographs of Stroud people celebrating and dancing on VE day are joyous.

It is only natural to think about our current lockdown and battle with Coronavirus in the context of some of the daily changes people experienced during the war years.   However, I am focused on the current home front effort in our communities.  It continues to be outstanding.  Small acts of kindness are taking place in the most unexpected places even as the weeks of isolation roll on.  There is a collective desire to overcome the frightening challenge presented by the virus and we will beat it.

When it is safe to do so, I would very much like to see parties, bunting and communities out on our streets together.  Next year’s VE day should also be treated as a big event too.  I’ll bring the bunting.

The Government announced that when the lockdown ends, Gloucestershire will be entering Tier 2 (High Alert).  Please see the graphic for details on what Tier 2 will mean for Stroud.